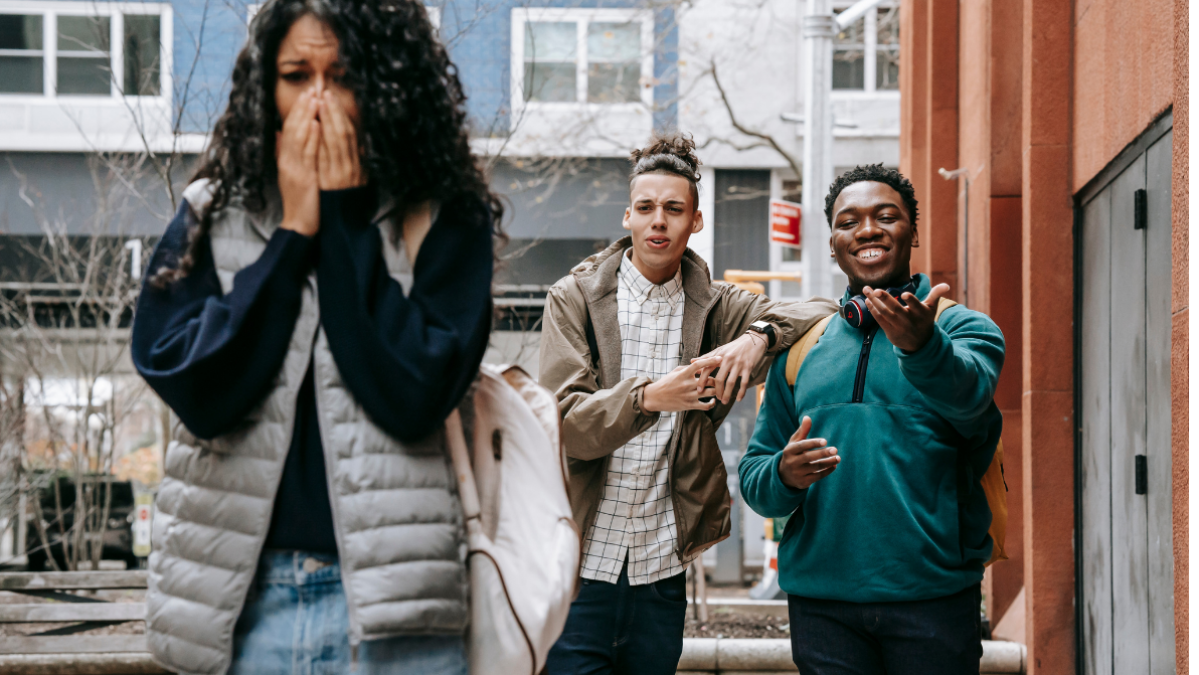 Peer to peer sexualised bullying and harassment can and does happen at school, college, socially or online. Children and young people may find it hard to talk about what is happening to them because they may feel fearful, embarrassed and ashamed even though whatever is happening to them is not their fault.

What is sexualised bullying and harassment?

Sexualised bullying is a behaviour, physical or non-physical, where sexuality or gender is used as a weapon against another. It is any behaviour which degrades someone, singles someone out using sexual language, gestures or violence, and victimising someone for their appearance. Sexual bullying is also pressured to act promiscuously and to act in a way that makes others uncomfortable.

Sexual harassment is unwanted behaviour of a sexual nature which: violates your dignity. makes you feel intimidated, degraded or humiliated and creates a hostile or offensive environment. These behaviours happen inside and outside school, in social groups and online. It is as serious as any form of hate crime and should be treated as such by parents, teachers and society in general.

Understanding the forms of sexualised bullying

Sexism is a behaviour, language or prejudice, which expresses institutionalised, systematic and comprehensive discrimination. It is based on a stereotypical view of masculine and feminine roles. Sexism limits the options of women and girls and can lead to discrimination or less favourable treatment. It is learned behaviour, however, and can therefore be 'unlearned'.

Unfortunately, there are many instances where sexism and this form of stereotyping comes into play. Rated and slated is when boys are encouraged to be sexually active and have multiple partners and if they achieve this, they get ‘rated’ by their peers. However, if a girl makes the same choice as the boy, she gets ‘slated’ for the same thing and bullied. We all have a responsibility to teach children and young people to break the barriers of being stereotyped for their gender.

The impact of sexualised bullying and harassment

There is evidence that sexual bullying is increasing and it is linked to domestic violence and other gender-based violence such as rape and sexual assault.

In June 2021, Ofsted carried out a review of sexual abuse in schools and colleges and they found  that 9 out of 10 girls and half the boys who took part in the review said being sent unsolicited explicit pictures or videos happened a lot to them or their peers. 92% of girls and three-quarters of boys complained of recurrent sexist name-calling. “The frequency of these harmful sexual behaviours means that some children and young people consider them normal,” the report said.

Sexual bullying can undermine someone's dignity and safety as well as affect their emotional wellbeing and lead to depression, isolation, eating disorders and self-harming. It is very common for sexual bullying to go viral both offline and online with no let up for the person on the receiving end. Boys are just as much victims of sexual bullying as girls. Boys too feel powerless to stop it, pressurised to do something they do not want to and called names if they choose not to be promiscuous or are not perceived to fit their peer’s ideals of masculinity. The scars of these effects can last a lifetime if not supported and encouraged to address these feelings.

In the Ofsted review they found that children and young people, especially girls said that they do not want to talk about sexual abuse for several reasons, even where their school encourages them to. For example, the risk of being ostracised by peers or getting peers into trouble is not considered to be worth it for something perceived to be commonplace. They worry about how adults will react, because they think they will not be believed, or that they will be blamed. They also think that once they talk to an adult, the process will be out of their control.

Why talking to your teen is crucial

It is important that children and young people are educated on the issues of sexual bullying from a young age to help them make positive choices. Talk to them about rising above what their peers expect of them and being responsible and resilient is essential.

Create a safe space for you and your teen to talk about things generally and openly. Ensure that there are no distractions and keep it casual. Keep your questions open and find out more about what is going on for them and the people they spend time with. Reassure them that you are there for them and will always be there to listen without judgement. It may help to use scenarios from a show on the TV or in a magazine to explore what they would do and what they could do if they were in a difficult situation.

It may be hard for them to open up to you straight away as they may be worried that as a parent you will react and respond in a way, they don’t want you too. Therefore, keep your emotions in check and let them guide you on what they need from you. Avoid belittling, punishments, blame or shame as that will be a sure-fire way of them shutting you out.

If they have experienced any form of sexualised bullying or harassment, they will need plenty of warmth, love and reassurance from you. They will need to feel safe and reminded that this is not their fault. It is important to go through all the options they have such as reporting it to the school or police.

This form of bullying is very serious and the person on the receiving end may need emotional support and counselling to deal with this too. You can call us on our confidential helpline on 0808 800 2222, email us at askus@familylives.org.uk or talk to us online. Young people can speak to The Mix or get in touch with SafeLine for advice and support.

If they have sent a nude image or video of themselves, you can get support from Report and Remove to get the image removed. You can also get in touch with CEOP for help. If you are worried about your child’s sexual behaviour and sense that they are pressuring others, you can speak to Stop it Now for advice and guidance.